Punjabi cuisine (from the Punjab region of northwestern India and eastern Pakistan) can be non-vegetarian or completely vegetarian. One of the main features of Punjabi cuisine is its diverse range of dishes. Home cooked and restaurant Punjabi cuisine can vary significantly, with restaurant style using large amounts of clarified butter, known locally as ghee, with liberal amounts of butter and cream with home cooked concentrating on mainly upon preparations with Whole Wheat, Rice and other ingredients flavored with masalas (spices). Roh Di Kheer, is cooked using rice. Rice is cooked for a long time in sugar cane juice.

Within the area itself, there are different preferences. People in the area of Amritsar prefer stuffed parathas and milk products. In fact, the area is well known for quality of its milk products. There are certain dishes which are exclusive to Punjab, such as Mah Di Dal and Saron Da Saag (Sarson Ka Saag). The food is tailor-made for the Punjabi lifestyle in which most of the rural folk burn up a lot of calories while working in the fields. The main masala in a Punjabi dish consists of onion, garlic and ginger. Tandoori food is a Punjabi speciality especially for non-veg dishes. Many of the most popular elements of Anglo-Indian cuisine - such as Tandoor, Naan, Pakoras and vegetable dishes with paneer - derive from the Punjab.

These are generally soaked overnight or for at least 8 hours and gently simmered on the embers of a tandoor (A clay oven of the shape of a horizontally sliced pot) along with ginger, garlic and a few other garam masala (whole spices like cardamom, cinnamon, mace, and bay leaf).

These are then combined with a tangy masala base which could include tomato or dried mango (aam choor powder) or even pomegranate seeds (anar dana). The character typical to the bean or whole lentil preparation is that the shape is retained intact, but the gentlest pressure would make it into a paste.

Dollops of cream and butter provide for the rich finishing touch. Garnishing is usually with shredded coriander leaves and juliennes of ginger.

The Punjabi breads are both flat breads as well as raised breads. The breads may be made of different types of flour and can be made in various ways:

The Tandoor also allows for tasty Chicken and Mutton preparations including Seekh Kebab, Tandoori Chicken, Reshmi Tikka and Malai Tikka. Naan is also very popular. It is served with most of the dishes made at an Indian restaurant. 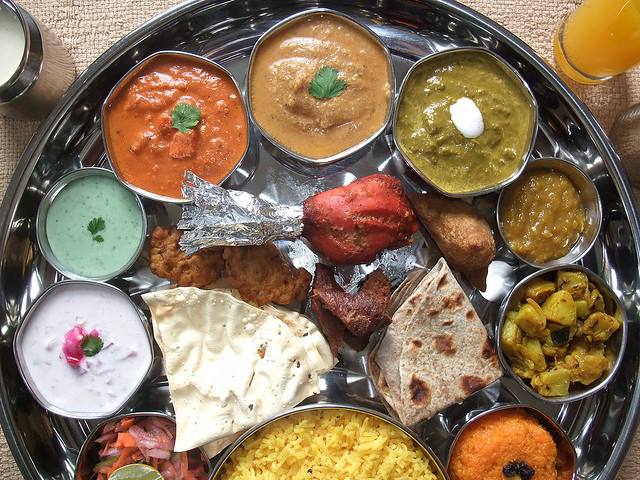