Kashmiri cuisine has evolved over hundreds of years. The first major influence was the food of the Kashmiri Buddhists and Pandits, the Hindus of the valley. The cuisine was then influenced by the cultures which arrived with the invasion of Kashmir by Timur from the region of modern Uzbekistan. Subsequently, it has been strongly influenced by the cuisines of Central Asian, Persia, and the North Indian plains.

The most notable ingredient in Kashmir cuisine is mutton, of which there are over 30 varieties. Also to be noted are Balti curries, popular in the United Kingdom for their exotic tastes, that were originally brought by Pakistani immigrants hailing from the Baltistan region of Pakistan-administered Kashmir.

Wazwan, a multi-course meal in the Kashmiri tradition, is treated with great respect. Its preparation is considered an art. Almost all the dishes are meat-based (lamb, chicken, fish, beef). It is considered a sacrilege to serve any dishes based around pulses or lentils during this feast. The traditional number of courses for the wazwan is thirty-six, though there can be fewer. The preparation is traditionally done by a vasta waza, or head chef, with the assistance of a court of wazas, or chefs.

Wazwan is regarded by the Kashmiri Muslims as a core element of their culture and identity. Guests are grouped into fours for the serving of the wazwan. The meal begins with invoking the name of Allah and a ritual washing of hands, as a jug and basin called the tash-t-nari are passed among the guests. A large serving dish piled high with heaps of rice, decorated and quartered by four seekh kababs, four pieces of meth maaz, two tabak maaz, sides of barbecued ribs, and one safed kokur, one zafrani kokur, along with other dishes. The meal is accompanied by yoghurt garnished with Kashmiri saffron, salads, Kashmiri pickles and dips. The feast ends with an elder leading the thanksgiving to Allah, which is heard with rapt attention by everyone. Kashmiri Wazwan is generally prepared in marriages and other special functions. The culinary art is learnt through heredity and is rarely passed to outside blood relations. That has made certain waza/cook families very prominent. The wazas remain in great demand during the marriage season (May - October). The essential Wazwan dishes include:
• Safed kokur or zafraan kokur
• Meth maaze
• Ristae
• Rogan josh
• Dhani phul
• Aloo bukhaar: chutney made with fresh plums, onions, sugar, lime juice and spices
• Gaade kufta
• Tabak maaz: Fried lamb ribs
• Daniwal korma: lamb in a yogurt-based gravy
• Aab gosht: Lamb curry cooked in milk
• Marcha-wangan korma
• Sheekh kabab: spicy ground lamb on skewers
• Gushtaab: Chopped lamb with spices cooked in oil, milk and curds
Kashmiri Pandit cuisine

Kashmiri Pandit food is also very elaborate, and is an important part of the Pandits' ethnic identity. The food usually uses a lot of yogurt, oils and spices as such turmeric, but avoids onion, garlic, tomatoes, and chicken. Unlike Kashmiri Muslim cuisine, it does not include many minced meat dishes.

An equal emphasis is laid on vegetarian and non-vegetarian dishes, although a bias for non-vegetarian dishes certainly exists - Pandits, a knowledge based community, having origins in a collective multi caste based scholar society, including Brahmins. Kashmiri Pandit is a community, not a caste. The philosophy of Kashmir Shaivism does not promote caste, it welcome all peoples into its philosophy group. Nund Rishi and Lalleshwari, the patron saints of Kashmir, have been vegetarians and loved nature in all its forms.
Typical vegetarian dishes include:
• Ladyar Tsaman (Indian Cheese in Turmeric)
• Veth tsaman (Indian Cheese, cooked in oil and Kashmiri spices)
• Dama oluv (Potato)
• Nadeir yakhean (Lotus Stem)
• Hak (with nadeir/vangan)
• Nadier palak
• Tsoek vangan
• Razmah goagji
Typical non-vegetarian are similar to Muslim dishes, but vary in taste, such as:
• Rogan josh
• Syun Qaliya
• Matshgand
• Syun Oluv
• Yakhein
• Kabargah
• Tsoek Tsarvan
• Gaad (Fish, cooked with Nadur or Monju or Muj[mooli])
There are also some other mutton dishes, cooked by the Kashmiri Pandits who migrated to the Indo-Gangetic Plain in the eighteenth and nineteenth centuries. These dishes also do not traditionally use any onions, garlic, chicken, or egg. Yogurt (zamud dod / dahi), asafoetida (angedan / hing), dried ginger (sonth), cinnamon (dalchini), cardamoms (elaichi), and cloves (laung) form the base of any gravy. The meat is roasted in the fat of the yogurt. The major difference between these dishes and those of the other Kashmiri Pandit families is that these dishes are drier, use less fennel (saunf), and in some cases, less yogurt. Besides, the meat is roasted for a longer duration, and there seems to be a fairly strong influence of the cooking style of the Muslims of Awadh.

Rice is the prime cereal. However, sweet wheat breads are also eaten. These include Roath, Sheermal, and Khameeri Puri. Bazbatta is a vegetable pilaf, commonly eaten at home with Koftey / Mats. Sarvari is a chickpea pilaf prepared on special occasions, including Navreh (Navroz / Nowruz) and birthdays.

Kashmiris are heavy tea drinkers. The most popular drink is a pinkish coloured salted tea called nun chai (or shir chai). It is made with black tea, milk, salt and bicarbonate of soda. The peculiar colour of the tea is a result of its unique method of preparation and the addition of soda. This salted tea is very much like the salted tea prevalent in various parts of Central Asia.

Nun chai is a common breakfast tea in Kashmiri households and is taken with breads like baqerkhani brought fresh from the bakers (kandur). Often, this tea is served in a large Samovars.

At marriage feasts, festivals, and religious places, it is customary to serve Kahwah, or Qahwah (originates from a 14th century Arab coffee,which, in turn, was named after an ancient wine of the sufis.) - a green tea made with saffron, spices and almonds or walnuts. Over 20 varieties of Kahwah are prepared in different households. Some people also put milk in kahwah (half milk + half kahwah). 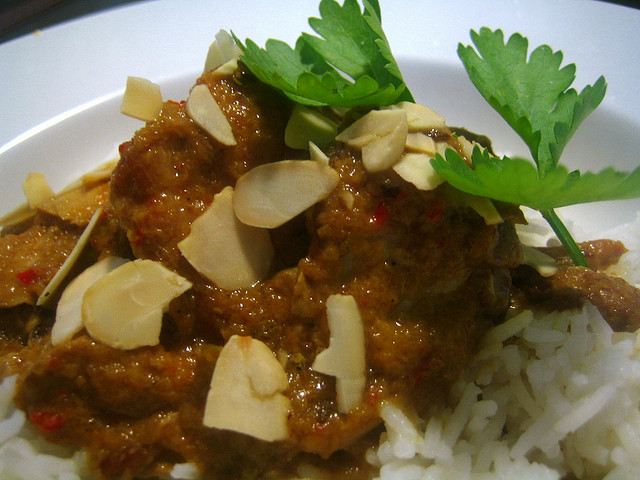