Pushkar is an esteemed religious destination for Hindus with around 400 temples and 52 bathing ghats. The holy lake here is believed to have appeared miraculously when a lotus flower fell off from the hands of Brahma. 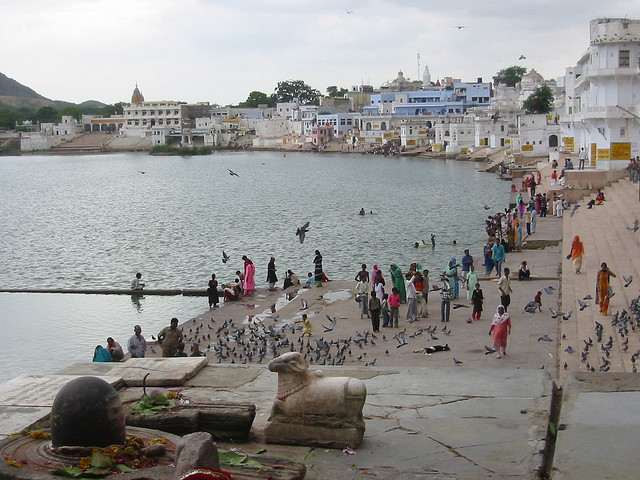 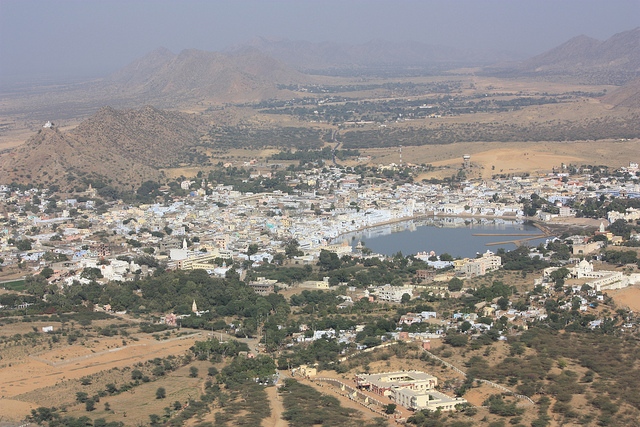 Pushkar is a fantastic interplay of history and mythology that makes it worthwhile to travel to this holy destination of Rajasthan.

According to lore, the city of Pushkar came into being After a battle between Lord Brahma and a demon named Vajra Nabh. After the demon was killed by Brahma with the help of a lotus flower, three petals floated down to Earth and landed in Pushkar leading to the creation of the three lakes of Pushkar.

Recorded history shoes that Pushkar was a favorite retreat of the Mughal rulers, which was later taken over by the Scindias after the eventual decline of the Mughal rule. The Scindias handed over the city to the British thus making Pushkar one of the few places in Rajasthan to be under direct British control, until Independence.

Air: Sanganer Airport located at Jaipur is nearly 130 km from the heart of the city Pushkar, and taxi charges about Rs 2500 from Airport to the city. Jaipur airport is connected to metro cities Mumbai and Delhi. Foreign travelers can take connection flights from Delhi international airport, which is nearly 400 km away from Pushkar. Taxi charges about Rs 7000 from Delhi to Pushkar.

Rail: Ajmer is the nearest railway station to Pushkar. This railhead is on the Broad Gauge line and is connected to all cities in India by trains. Ajmer is about 11 km away from Pushkar and taxi fare from Ajmer to Pushkar is about Rs 200.

Road: Ajmer main bus stand is nearly 11 km away. Many public transport buses pass through Pushkar. Ajmer is well connected with all major cities nearby. Deluxe Super Deluxe and Volvo buses provide services from Delhi, Jaipur and Jaisalmer to Ajmer. The bus fare ranges between Rs 3 to Rs 4 per km.

Shopping in Pushkar can be truly exciting especially during the annual Urs Festival or Pushkar Festival .At these festivals, folk artisans and craftsmen display an array of traditional items which include silver and beaded jewellery, embroidered fabrics ,brass utensils ,miniature paintings and Rajasthani puppets.

Pushkar is also a place where you can buy souvenirs of Rajasthan. The shopping centers in Pushkar are Sarafa Bazaar, Baza Bazaar and Kedalganj Bazaar.

Hotels in Pushkar offer a luxurious stay in the serene atmosphere of this pilgrim city where devout Hindus come to take a holy dip in the Pushkar Lake on the full moon of Karthik (November) or visit the Dargah of Khwaja Saheb, the great Sufi saint during the time of Urs in Ajmer.

The annual Pushkar festival one of the most colorful festivals of India brings tourists from around the globe to this tiny town in the state of Rajasthan. It is mainly a cattle fair with exciting camel races and display of folk culture.

Pushkar offers some of the best 3star hotels, Deluxe Hotels and Heritage Hotels of Rajasthan.

Some of the prominent hotels in Rajasthan are:

Pushkar Cattle Fair: If Pushkar is renowned for as a Pilgrimage center then it is equally famous for its Cattle Fair. The name “Cattle Fair�? is misleading since various activities like Auctions, Sports, Musical encores, Markets constitute a major chunk of the activities.

The Pushkar Lake is the point of attraction for millions of devotees during the full moon day of Kartik Purnima (generally October-November) for a holy dip and provides an opportunity for the traders and organizers to create a festive bonanza for the devotees. The Camel and other domesticated animal trading remains the main draw. A series of cultural events precede the fair which includes attractive puppet shows and camel races.