Chitradurga is a town in the southern part of the Indian state of Karnataka. It is also the headquarters of Chitradurga district. Chitradurga was also known by the names Chitradurg , Chitrakaladurga, chittaldurg. Chittaldrug was the name officially used by the British Govt.

Chitradurga derives its name from Chitrakaldurga. It is located at a distance of 202 kms Northwest of Bangalore. History dates Chitradurga District to the period of the Ramayana and Mahabharata. Located at the base of a chain of lofty peaks, Chitradurga is characterized by its stunning boulder-strewn landscape. The whole district lies in the valley of the Vedavati River, with the Tungabhadra river flowing in the Northwest.

This famous hill-Fort town is the headquarters of the district of the same name. Also known as the Place of Stones- Kallina Kote, Chitiradurga is strategically placed from the military point of view, as it came under the rule of feudatory dynasty of Vijayanagar called the Nayak Paleyagars.

Nestled at the base of a chain of lofty peaks, Chitradurga is characterized by its stunning boulder-strewn landscape. Natives believe that these massive boulders are remnants of the arsenal used during the duel between Pandava Bhima and the demon Hidimbasura, an event mentioned in the Epic Mahabharata. Chitradurga derives its name from Chitrakaldurga, an umbrella-shaped lofty hill found here.

The boulders that lie scattered in and around Chitradurga belong to the oldest rock formation in the country. The district is rich in mineral deposits, including gold prospecting at Halekal, Kotemardi or Bedimaradi, etc., and open cast copper mines at Ingaldhal. The Kallina Fort is a major attraction here and tourists travel to Chitradurga from all over India. 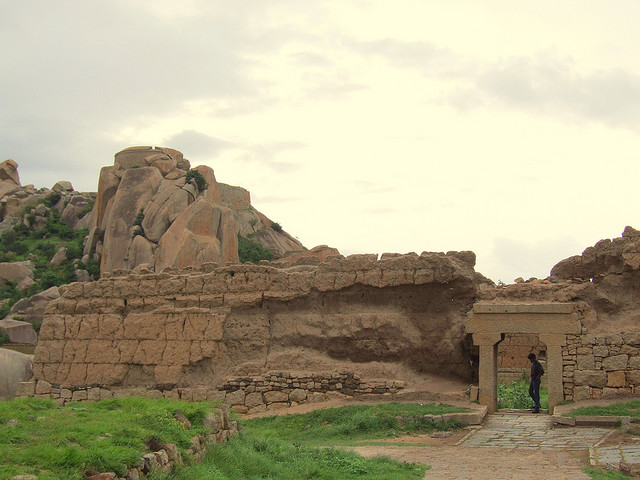 Chitiradurga got its name from the umbrella-shaped lofty hill Chitrakaldurga present here. Historically, Chitiradurga dates back to the period of the Ramayana and Mahabharata.

According to a story in the epic Mahabharatha, a man-eating giant named Hidimbasura lived on the Chitradurga hills. He was a terror to everyone there. When Pandavas were on a exile, Bhima and the giant had a war and he killed Hidimbasura. Peace was bought to the entire region. The boulders there were used as part of the arsenal. The city rests on boulders which are the oldest rock formation in the country.

Air: The nearest airport is at Bangalore airport (200 kms)

Road: Chitiradurga is located at the junction of NH-4 (Bangalore-Poona National Highway) and NH-13 (Sollapur-Mangalore National Highway), and hence, is well-connected by a vast network of roads. From Bangalore - 200 Kms (NH4) It is on the Bangalore Pune highway.