Shivpuri in Madhya Pradesh was earlier known to be the capital of Scindia clan of Gwalior in the summer. Also filled with thick forests, this place was once filled with diverse flora and fauna.

Shivpuri is steeped in the royal legacy of its past, when it was the summer capital of the Scindia rulers of Gwalior. And earlier, its dense forests were the hunting grounds of the Mughal emperors when great herds of elephants were captured by emperor Akbar.

Much later, it was the Tiger that roamed the wooded hills and many a magnificent beast was 'bagged' by royal Shikaris. Today Shivpuri is a sanctuary for rare wildlife and avifauna. Its royal past has thus been transformed into a vibrant, hopeful present.

Shivpuri is the administrative headquarters of the Shivpuri district in the Gwalior division. Named after the Hindu God Shiva, Shivpuri formerly called Sipri has a rich royal legacy of vast cultural heritage.
Located at an altitude of 1,515 feet above the sea level, Shivpuri has four main river passing through it mainly Parvati, Sindh, Kuno and Betwa in addition to many other smaller streams. 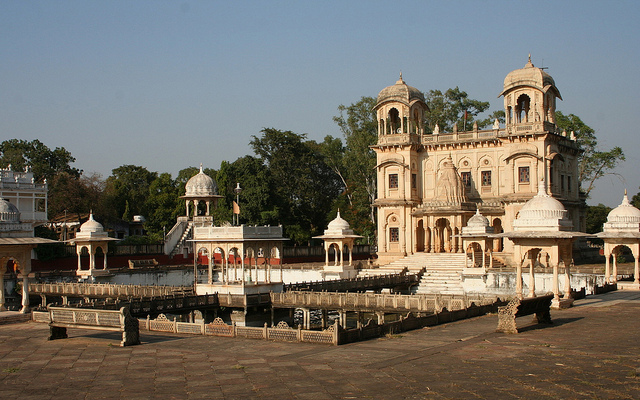 The history of Shivpuri dates back to the Mughal period when the dense forests were used as hunting grounds by Mughal Emperors. Emperor Akbar is known to have captured herds of elephants. Many tigers also roamed the hills of the Vindhyas and were hunted by the royal Shikaris.

Shivpuri was formerly part of the Narwar Sarkar and was gifted to Kachawaha Rajputs before the administration was taken over by the Scindia’s of Gwalior. Maharaja Madhav Rao Scindia brought about the development of Shivpuri and built palaces here which today attract many tourists to the region. Shivpuri used to be the summer capital of the Scindia family.

Air: Gwalior is the nearest airport to Shivpuri. Gwalior is about 112 km away from Shivpuri. Flight services are available to Khajuraho, Delhi and Varanasi. Delhi, 430 km away from Shivpuri, is the major international airport, which is connected to all major cities in India and many cities in abroad. Taxis are available in the Gwalior airport and cost about Rs 2500 to reach Shivpuri.

Jungle Safari: Shivpuri in Madhya Pradesh is famous for the wildlife sanctuaries that preserves the wild animals in their natural habitat. The deep woody forest around these parks offers a wonderful experience of seeing animals in their natural surroundings. The enthralling experience of enjoying the abundant natural beauty, Jungle Safari in the sanctuaries is an unforgettable experience.

Safari through the well maintained, interlacing roads, provide the rare chances of spotting deer, herds of Chital, families of Nilgai, and other untamed animals. The luckiest will be able to see even a sloth bear.

The unusual experience of seeing the wild animals in their normal environment, and the excitement of a pleasant drive through the zigzag paths of the dense forest makes Jungle Safari a favourite adventure for tourists who wants to explore the nature’s splendor in a different way.