Ponda is a city and a municipal council in North Goa district in the Indian state of Goa. It is located in the central part of Goa. Ponda city lies about 28 km south-east of Panaji and 17 km north-east of Margao and is also the capital of Ponda Taluka. Ponda is well connected by road to the Panaji (Capital of Goa) and main railway junction of Margao. It is the industrial centre of the state of Goa with many large factories and industrial estates located there. Ponda also is the fastest growing city in Goa. Goa's major engineering college, the Goa Engineering College, is located at nearby Farmagudi.Ponda is popularly known as to be the " Cultural Capital of Goa".

Located 28 km from Panaji, Ponda is a major town in the North Goa district. Ponda's claim to fame is its unrivalled status as the cradle of Hindu pilgrimages in Goa. After remaining a part of the dominions of Sultan Adil Shah of Bijapur, Ponda fell to the Portuguese in 1791 who annexed it along with the nearby talukas of Quepem, Canacona and Sanguem.

Among the number of sacred shrines that dot the Ponda landscape, there are five famous Hindu temples and the Safa masjid, the largest mosque in Goa. As the Portuguese unleashed a wave of destruction of religious shrines during the early days of the Inquisition, the idols of Hindu temples were clandestinely smuggled into Ponda, then a safe haven under the territory of the Bijapur Sultan.

Today a flourishing tourism industry has grown around these renowned temples with devotees coming from faraway lands. Ponda has also come up as an industrial city with many large factories and industrial estates nearby. Goa's only engineering college, the Goa College of Engineering is located at nearby Farmagudi. Ponda also serves as a convenient base to explore two of Goa's wildlife sanctuaries, the Bondla and the Mahavir Wildlife Sanctuary.

Ponda is an important business center of Goa which has a religious prominence and is one of the most revered religious sites in the state. Ponda city is located at 29 km from Panjim and provides an opportunity to be blessed by no less than 50 sacred Hindu Gods residing in their temples. These shrines and the pious surroundings have also given rise to the flourishing trade of oil, fruit, flowers, diyas and coconut as offerings to these Gods. The famous mosque of Safa Shahouri, the six-storeyed 'deepstambha', the magnificent 'Garuda' pillar and the churches are strong indicators to the thriving secular culture of the state and the country.

Ponda can otherwise be termed as the `temple town` of Goa as it has a number of unique Hindu temples rebuilt on the original structures that were destroyed by the Portuguese.

Five of Goa`s most important Hindu temples are on the inland route between Panaji and Margao. The Shiva temple of Shri Manguesh is at Priol-Ponda Taluka, about 22 km from Panaji. This tiny 18th century hilltop temple, with its white tower, is a local landmark. Less than 2 km further down the road is Shri Mahalsa, a Vishnu temple.

About 5 km from Ponda are the Shri Ramnath and Shri Manguesh temples, and nearby is the Shri Shantadurga Temple. This temple sports an unusual, almost pagoda-like, structure with a roof made from long slabs of stone.
Further south are the temples of Shri Chandreshwar and Shri Mallikarjuna. 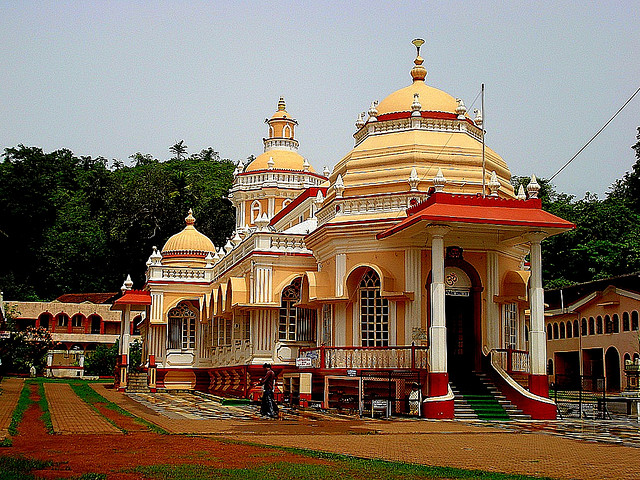 Ponda formed part of the Novas Conquistas or the "New Conquests" of the Portuguese. It was ruled by the Sonde Rajas under the Vijaynagar Kingdom or the Bijapur Sultanate. The territory of Ponda was not under Portuguese rule in the 16th Century and hence was seen as a safe haven by the Hindus fleeing persecution by the Jesuits and Portuguese. The forests of Ponda were ideal places for Hindus to form make shift temples with the Idols they had salvaged from the broken temples of Sashti (Salcette). These make shift temples were slowly renovated as the Hindus prospered again and now most of the Major Hindu temples in Goa are found here. The Portuguese eventually took over the area in 1791 from the Raja of Sonda along with Quepem, Canacona and Sanguem. It began as an administrative center with the establishment of administrative offices and court and soon became a commercial center. Most of the area known as Ponda today was a part of "Quela" (Kavalem) village. However religious zeal of the Portuguese had ebbed by the 18th century and Portugal itself had seen many political and religious changes due to the prevailing inquisition. Therefore Ponda continued to have a Hindu Majority even during the Portuguese rule.

How to Reach Ponda by Air
The Dabolim airport is the nearest airport to Ponda.

How to Reach Ponda by Rail/Train
The Margao (17 km) railway station is the nearest railhead to Ponda.

How to Reach Ponda by Road
Ponda is connected to state capital Panaji (28 km) by the National Highway 4A. The NH 4A also connects Ponda to the neighboring state of Karnataka. Buses ply regularly between Panaji and Margao via Ponda.

Ponda is dotted with a number of good hotels that offer comfortable stay. Most of the budget hotels are situated on the Belgaum Road which provide well-furnished rooms to guests. GTDC's Tourist Cottage at Farmgudi is the best mid-range hotel. Other popular hotels are Hotel Menino, Hotel Musafir, Hotel President, Hotel Prakash Heritage, Hotel Venkatesh Leela, Atish Hotel and Ganesh Residency.