Zangla is a scenic village located 35 km from Padum in Kargil District of Jammu and Kashmir. It lies in the northern side of the Zanskar Valley.

The village, surrounded by beautiful hills, was being ruled by a titular king till his death a few years back. His castle, now in ruins except from a small chapel, stands sentinel over this isolated valley.

Zangla is a base camp for trekkers in the summer and the take-off point for the Padum-Lamayuru and the Padum-Hemis treks. The tourist complex situated at Padum offers excellent accommodation.

The ancient caves, a nunnery and an old rope suspension bridge - a rare feat of primitive engineering- add its charm. Excursions to Tsa-zar, Stongdey, Zanskar and Padum will be an enchanting experience.

Located at a distance of approximately 35 km from Padum, Zangla is one of the major tourist attractions of Ladakh. Till a few years, it was under the rule of a titular king, who is not alive anymore. Zangla is mainly famous for a number of places that the village has. There is an old castle in the village, which now lies mostly in ruins. The only intact remnant of the castle is a small chapel that overlooks the deserted valley below. Quite near to the castle is an old Nunnery, housing a small population of monastic nuns.

Another place worth visiting in Zangla, Ladakh, is an old monastery situated in the nearby village of Tsa-zar, mid-way between Stongdey and Zangla. The monastery boasts of some of the most exquisite wall paintings. The village of Zangla in Ladakh also serves as the nodal point on the popular Padum-Stongdey-Zangla-Karsha-Padum round trip, covering most of the cultural sites of Zanskar. Last but not the least, it is the starting point for the treks to Padum-Markha valley.

Nestled in the snow-clad Himalayas, Zangla is a gorgeous destination dotted with uplands, barren cliffs and plateaus. The village of Zangla can be reached after a 5 hour walk from Tonde, along the right bank of the river Zanskar. Ruled by a titular king till 1989, Zangla lies to the north of Zanskar, 35 km from Padum. The time period of June to early November is considered the best for visiting Zangla. 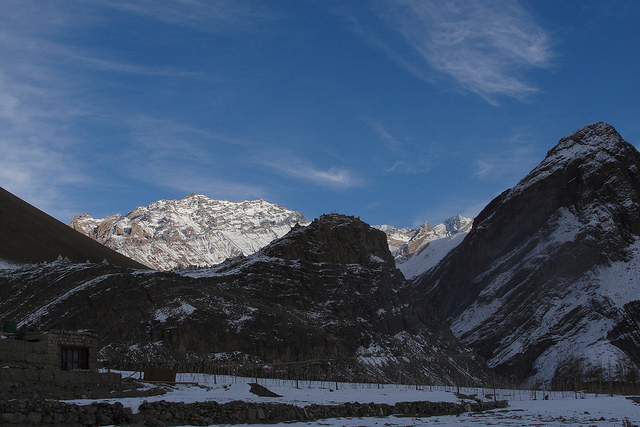