One of the longest Dam in the world, Hirakud stands in its lone majesty across the great river Mahanadi which drains an area of 1,33,090 Sq. km more than twice the area of Sri Lanka. The bulk of this Dam contains earth, concrete and masonry materials, sufficient to make a road 8 metres wide and pave it from Kanyakumari to Kashmir and Amritsar to Dibrugarh in Assam. From horizon to horizon the reservoir forms the largest artificial lake in Asia with an area of 746 Sq.km having a shore line over 640 km. A twenty-one kilometres drive on the dyke affords a unique experience of calm serenity and majesty of nature. One can enjoy the sight of the mighty Hirakud Dam and the fantastic expanse of water from the top of the revolving minaret called Gandhi Minar on the north end and comfortably stay at Ashok Nivas,a luxury Guest House adjoining the Nehru Minar at the other end of the Dam. As the largest multipurpose river valley project of the world, it is a real gift to the nation-"all for happiness and prosperity". Hirakud dam was the first post independence river valley project in India. Situated at a distance of 15 km to the north of Sambalpur, it holds the distinction of being the longest dam of the world. It is a complex structure built across the river Mahanadi and was formed for the purpose of irrigation and flood control. Hirakund dam is about 4.8 km long, bordered by earthen dykes on its left as well as right. Along with the dykes, the length of the dam increases to 25.8 km. the storage capacity of Hirakud Dam is 5818 m.

The Hirakud dam was constructed to regulate the even flow of the Mahanadi River in Orissa. Before the dam was built, the area used to have droughts in the lower basin and violent floods in the upper plain regions. With the construction of this dam, this problem was put to an end as it was possible to regulate the flow of water in the desired area. Along with this, the dam also produces hydro electricity, thus making judicious use of natural resources as well as technology. 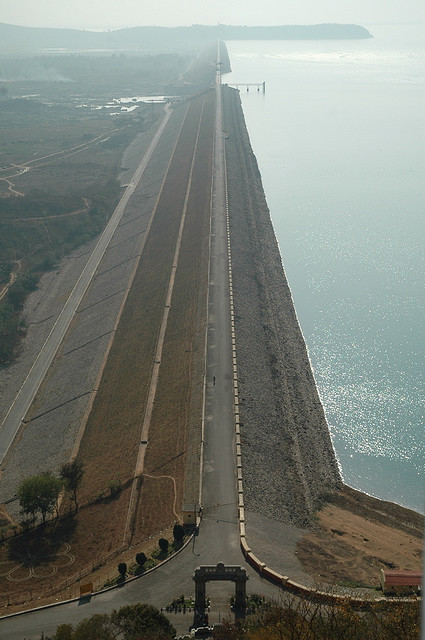