The temple of Dwarkadheesh, also known as Jagat Mandir, is built on the north bank of the Gomti Creek. The temple dates back to 2,500 years. Architecturally the temple is constructed on the same plan and system as most of the Hindu sacred edifices of antiquity. Sixty columns support the roof of the audience hall of the Jagat Mandir. The main temple is five-story high with the lavishly carved conical spire rising to a height of 157 feet. There is the one-meter tall, four handed black idol of Ranchhodrai, the ruler of Dwarika. Amongst the large number of temples belonging to different periods in the history of Dwarka, the most popular with pilgrims is the temple of Rukmini, Lord Krishna's wife, who is considered an incarnation of Lakshmi, the goddess of wealth and beauty.

In addition to its temples and legends, Dwarka is also sanctified as the seat of Adi Shankaracharya, who established four seats (maths) in four different directions in the country. Research work in Sanskrit is carried on at the Shankaracharya's seat known as Sharad Peetha.

Sabha Mandapa, Dwarka, Gujarat, India is a part of the famous Dwarkadhish temple. This Dwarka Sabha Mandapa dates back to the 12th century.

The middle part of the stunning Sabha Mandapa houses a small temple of Balramji, which is positioned at a lower level. This temple also houses the idol of Shri Mahaprabhuji. The people behind the construction of the Dwarkadish temple have shown their knowledge and proficiency by placing the deity of elder brother Balramji in the Sabha Mandapa and deity of Mother Devaki facing the Lord Dwarkadhish temple.

The sanctum of Sabha Mandapa in Dwarka and the Dwarkadhish temple itself is so outstanding that one would not think of moving ahead. At this place, you can also enjoy the natural beauty of the surroundings through jharokhas of the temple. 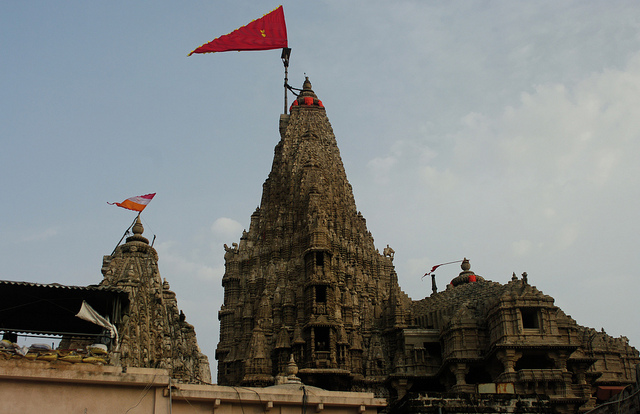