The tradition of music and dance goes back to the times when India was the land of kings and queens, princes and princesses. The people have simple tastes and preferences and have their own distinctive lifestyle.

Every dance is accompanied with music or singing which, in India, can sound like music when sung like it is supposed to be sung. The tradition of music in Haryana goes back to the Vedic times, and it is the only state in India to have towns and villages named after different ragas.

Haryana is rich in folk music, whose roots are firmly entrenched in the clasical music of yore. The famous Sringar rasa (based on love songs) has an indirect association with renowned ragas like Bhairavi, Jayjaywanti, Gara (a persian style), Khamaj and Kafi.
However, the folk singer has no idea what a raga is and just goes out and sings.

Mainly string instruments are used to make music. The sarangi is generally preferred. For the wind instruments, the been and the bansuri provide lilting tunes in tandem with the the dholak, a drum usually played with the palms or little sticks. A matka (earthen pitcher) may replace the dholak in certain areas to form the backbeat.
The Jogis, Bhats and Sangis are the people who have made folk music popular in Haryana. The Jogis prefer the sarangi to form the musical backdrop to their songs which revolve around tales of chivalry and valour.

There are other famous instruments which are used along with singing. The shehnai (a flute-like instrument played mainly at weddings), shankh (conch shell) harmonium, damru (a small palm-held drum with strings attached to beads which hit the sides when shaken), nagara, ghungru, tasha, khanjri and manjira. Musical genuises, these Haryanavis; they create music even with matchsticks, papaya (yes, the fruit!), the hard core of a mango and a strip of wood.

In India, music and dance are linked to each other. Often a particular region will have its own style of dance, relying mainly on its religious and cultural affinity. Be it a holy festival, the birth of a child, the harvesting of crop or just good ol’ one too many of the hangover liquid, any time is dance time in India. 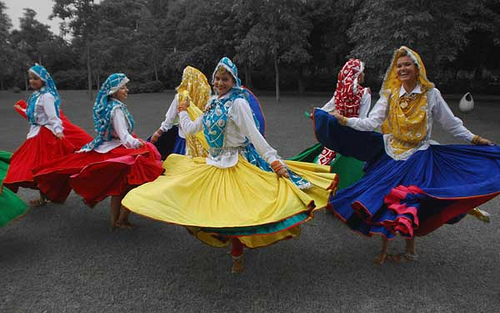